Welcome to the Home Page of Lew Custode… 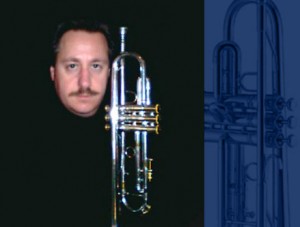 Lew Custode, trumpet player and vocalist, began playing Traditional Jazz at an early age. As an accomplished musician, he has performed with a wide variety of music ensembles including rock bands, jazz and commercial dance groups, big bands, bass quintets, pit orchestras and concert/marching bands. Additionally, Lew continues to be a much sought-after and featured trumpet soloist for church services and religious functions throughout the Western New York area. While he approaches each style of music with unbridled intensity, his love for Traditional Jazz, along with his seemingly endless enthusiasm to perform before an audience, has been described as nothing less than contagious.

What A Wonderful World  “Tribute to Louis Armstrong”,  Custode and Parisi recorded LIVE at Oinktoberfest, October 2012

When I Take My Sugar To Tea  “Tin Pan Alley Classic”, Custode and Parisi recorded LIVE at Oinktoberfest, October 2012

What people are saying about Lew…

“Lew Custode and the Barroom Buzzards played a very special set for our parents at their home in Clarence, New York.  My Dad is a lifelong Buzzards fan who is currently fighting Stage IV cancer.  I can’t adequately explain how important those two hours were for us as a family trying to catch our breath from the tragedy of this disease.  Lew Custode is not only a stellar performer, he’s a caring man who we won’t forget.”

“We have booked “Custode and Parisi” at our dinner and wine pairing fundraiser for the past three years and have had an extremely positive experience each time! Lew Custode is very easy to work with. He is reliable and quick to respond. And the music is fantastic!! Our guests comment on the beautiful music every year. It really does create a wonder ambiance and has definitely contributed to the success of our event. We are very grateful to have found such fantastic musicians!”

“The Barroom Buzzards with Lew Custode played an amazing performance during our Swing Festival at The Stage in Warsaw, NY. On a cold night they brought a hot sound to our audience. We all recommend them and their great music that keeps tradition alive. Thanks, Buzzards, for a great show!”

“Lew Custode is an excellent musician and business man. He is punctual and works well with his band. He also wants to please his clients and does exactly what he is asked to do. I would recommend Lew and his team of musicians if you are looking for a group who will entertain and please a large or small crowd.

“Lew and the Barroom Buzzards gave the Clarence Chamber of Commerce Annual Award Dinner an outstanding performance with a Mardi Gras theme. His ability and knowledge of music keeps him above many other groups, and I look forward to having Lew Custode and his group perform at other events we sponsor.”

“Lew put together a special group with the Barroom Buzzards to play traditional Dixieland Jazz for us. The results were outstanding. Lew’s trumpet style is clear and exciting. I consider him to be matchless in ability and technique. We have invited the group to play again for us next year.”

“Lew and his band have been playing for us for years–they are always a
hit at our staff picnic. Lew is wonderfully flexible, reliable, and easy
to work with, and the music is great!”

“As an ardent follower of traditional jazz in the WNY area I have been treated to the musical talents of Lew Custode many times. He has the knowledge, ability and stage presence that we look for in an entertainer. His range of styles is vast and he is able to convey his musical and vocal talents with authenticity in all fields.”

“Lew and his combo have provided a perfect mix of music for our special post-concert events at Kleinhans. Our BPO patrons have thoroughly enjoyed their wonderfully rendered performances.”

“Lew…Your fine performance at the “By Reservation Only” dinner here at the University at Buffalo received rave reviews. Your music complimented the evening’s festivities and the students were talking about how much they enjoyed the strolling for quite some time. I will definitely keep you in mind for future events.”

“Lew Custode is one of Buffalo’s best jazz artists. His spectacular trumpet playing and smooth vocals set a high standard for jazz in Western New York. He is a true professional and a great entertainer.”

“Lew Custode and his hand picked musical partners, have played Lebro’s for a couple of years. Their brand of music is a pleasure to listen to. The musicians have the ability to play a variety of styles of music. We will have them back again and again.”

“When you listen to Lew play you can feel the emotion he puts into his playing, always very professional, love’s to add humor and make his audience a part of the entertainment. I have great respect for him and he has passed his great talents to his daughter just as his father passed them to him.”

“Lew Custode has played for numerous ceremonies at Old Fort Niagara including the Visitor Center Groundbreaking and Grand Opening, and Flag Days. He sets a dignified and graceful tone for every event with his accomplished music. The anthems of those countries involved in the history of Fort Niagara (United States, British, French and Canadian) are all beautifully rendered by his skillful talents. Lew also provided a particularly poignant passage at a rare Memorial service at FortNiagara, when he solemnly played the Navy Anthem in respect for the gentleman, who was a former serviceman and an avid sailor.”

“Lewis Custode, Jr. has been a favorite musician and vocalist of the Village of Youngstown for many years.  Whether it be “The History of the Trumpet” presentation to our Historical Society or New Orleans Jazz and standards, at our Friday Night Summer Concerts, Lew is the Western New York entertainer most requested.”

“Lew Custode – trumpeter extraordinaire.  When Lew plays in a group at our society functions, we can always count on hearing hot Dixieland Jazz plus his very fine “Louis Armstrong” vocals.  He’s a very fine local musician; one of our best.”

“Lew and his crew have provided just the perfect background music at any function I have coordinated.  At each of my events Lew has played, at least one person has asked me who the fantastic musicians are!  I highly recommend Lew Custode for any event!  He is truly a class act!”